Worm reducers have been the go-to solution for right-angle power transmission for generations. Touted for their low-cost and robust construction, worm reducers can be
found in almost every industrial setting requiring this type of transmission. Unfortunately, they are inefﬁcient at slower speeds and higher reductions, produce a lot of heat, take up a lot of space, and require regular maintenance.
Fortunately, there is an alternative to worm gear sets: the hypoid gear. Typically used in automotive applications, gearmotor companies have begun integrating hypoid gearing into right-angle gearmotors to solve the problems that arise with worm reducers. Available in smaller overall sizes and higher reduction potential, hypoid gearmotors have a broader range of possible uses than their worm counterparts. This not only allows heavier torque loads to be transferred at higher efﬁciencies, but it opens possibilities for applications where space is a limiting factor. They can sometimes be costlier, but the savings in efﬁciency and maintenance are well worth it.
The following analysis is targeted towards engineers specifying worm gearmotors in the range of 1/50 to 3 horsepower, and in applications where speed and torque are controlled.

How do Worm Gears and Hypoid Gears Differ?

In a worm gear set there are two components: the input worm, and the output worm gear. The worm is a screw-like gear, that rotates perpendicular to its corresponding worm gear (Figure 1). For example, in a worm gearbox with a 5:1 ratio, the worm will complete ﬁve revolutions while the output worm gear will only complete one. With a higher ratio, for instance 60:1, the worm will complete 60 revolutions per one output revolution. It is this fundamental arrangement that causes the inefﬁciencies in worm reducers. 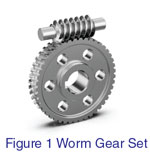 To rotate the worm gear, the worm only experiences sliding friction. There is no rolling component to the tooth contact (Figure 2). 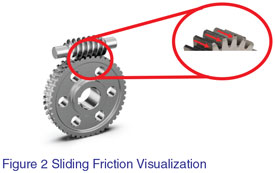 In high reduction applications, such as 60:1, there will be a large amount of sliding friction due to the high number of input revolutions required to spin the output gear once. Low input speed applications suffer from the same friction problem, but for a different reason. Since there is a lot of tooth contact, the initial energy to start rotation is higher than that of a comparable hypoid reducer. When driven at low speeds, the worm requires more energy to continue its motion along the worm gear, and a lot of that energy is lost to friction.

On the other hand, hypoid gear sets consist of the input hypoid gear, and the output hypoid bevel gear (Figure 3). 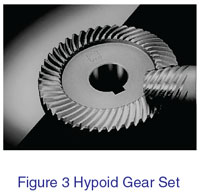 The hypoid gear set is a hybrid of bevel and worm gear technologies. They experience friction losses due to the meshing of the gear teeth, with minimal sliding involved. These losses are minimized using the hypoid tooth pattern which allows torque to be transferred smoothly and evenly across the interfacing surfaces. This is what gives the hypoid reducer a mechanical advantage over worm reducers.

How Much Does Efficiency Actually Differ?

One of the biggest problems posed by worm gear sets is their lack of efﬁciency, chieﬂy at high reductions and low speeds. Typical efﬁciencies can vary from 40% to 85% for ratios of 60:1 to 10:1 respectively. Conversely, hypoid gear sets are typically 95% to 99% efﬁcient (Figure 4). 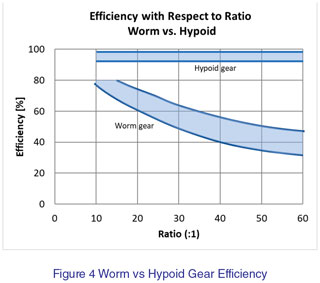 In the case of worm gear sets, they do not run at peak efﬁciency until a certain “break-in” period has occurred. Worms are typically made of steel, with the worm gear being made of bronze. Since bronze is a softer metal it is good at absorbing heavy shock loads but does not operate effectively until it has been work-hardened. The heat generated from the friction of regular operating conditions helps to harden the surface of the worm gear.
With hypoid gear sets, there is no “break-in” period; they are typically made from steel which has already been carbonitride heat treated. This allows the drive to operate at peak efﬁciency from the moment it is installed.

Why is Efficiency Important?

Efﬁciency is one of the most important factors to consider when choosing a gearmotor. Since most have a very long service life, choosing a high-efﬁciency reducer will minimize costs related to operation and maintenance for years to come. Additionally, a more efﬁcient reducer allows for better reduction capability and use of a motor that
consumes less electrical power. Single stage worm reducers are typically limited to ratios of 5:1 to 60:1, while hypoid gears have a reduction potential of 5:1 up to 120:1. Typically, hypoid gears themselves only go up to reduction ratios of 10:1, and the additional reduction is provided by another type of gearing, such as helical.

Hypoid drives can have a higher upfront cost than worm drives. This can be attributed to the additional processing techniques required to produce hypoid gearing such as machining, heat treatment, and special grinding techniques. Additionally, hypoid gearboxes typically utilize grease with extreme pressure additives rather than oil which will incur higher costs. This price difference is made up for over the lifetime of the gearmotor due to increased performance and reduced maintenance.
A higher efﬁciency hypoid reducer will ultimately waste less energy and maximize the energy being transferred from the motor to the driven shaft. Friction is wasted energy that takes the form of heat. Since worm gears produce more friction they run much hotter. In many cases, using a hypoid reducer eliminates the need for cooling ﬁns on the motor casing, further reducing maintenance costs that would be required to keep the ﬁns clean and dissipating heat properly. A comparison of motor surface temperature between worm and hypoid gearmotors can be found in Figure 5. 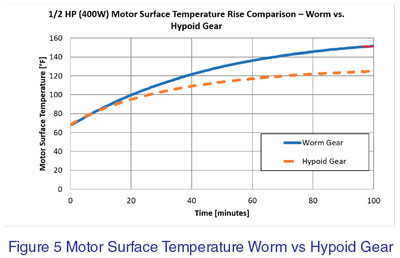 In testing the two gearmotors had equally sized motors and carried the same load; the worm gearmotor produced 133 in-lb of torque while the hypoid gearmotor produced 204 in-lb of torque. This difference in torque is due to the inefﬁciencies of the worm reducer. The motor surface temperature of both units began at 68°F, room temperature. After 100 minutes of operating time, the temperature of both units began to level off, concluding the test. The difference in temperature at this point was substantial: the worm unit reached a surface temperature of 151.4°F, while the hypoid unit only reached 125.0°F. A difference of about 26.4°F. Despite being powered by the same motor, the worm unit not only produced less torque, but also wasted more energy. Bottom line, this can result in a much heftier electric bill for worm users.
As previously stated and proven, worm reducers run much hotter than equivalently rated hypoid reducers. This reduces the service life of these drives by putting extra thermal stress on the lubrication, bearings, seals, and gears. After long-term exposure to high heat, these components can fail, and oil changes are imminent due to lubrication degradation.
Since hypoid reducers run cooler, there is little to no maintenance required to keep them running at peak performance. Oil lubrication is not required: the cooling potential of grease is enough to ensure the reducer will run effectively. This eliminates the need for breather holes and any mounting constraints posed by oil lubricated systems. It is also not necessary to replace lubricant because the grease is meant to last the lifetime usage of the gearmotor, eliminating downtime and increasing productivity.

More Power in a Smaller Package

Smaller motors can be used in hypoid gearmotors due to the more efﬁcient transfer of energy through the gearbox. In some instances, a 1 horsepower motor driving a worm reducer can produce the same output as a comparable 1/2 horsepower motor driving a hypoid reducer. In one study by Nissei Corporation, both a worm and hypoid reducer were compared for use on an equivalent application. This study ﬁxed the reduction ratio of both gearboxes to 60:1 and compared motor power and output torque as it related to power drawn. The study concluded that a 1/2 HP hypoid gearmotor can be used to provide similar performance to a 1 HP worm gearmotor, at a fraction of the electrical cost. A ﬁnal result showing a comparison of torque and power consumption was prepared (Figure 6). 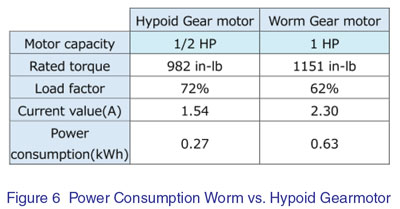 With this reduction in motor size, comes the advantage to use these drives in more applications where space is a constraint. Due to the way the axes of the gears intersect, worm gears take up more space than hypoid gears (Figure 7). 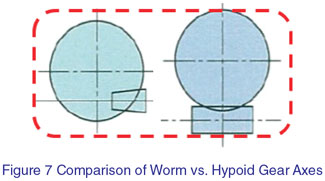 Coupled with the ability to use a smaller motor, the overall footprint of the hypoid gearmotor is much smaller than that of a comparable worm gearmotor. This also helps make working environments safer since smaller gearmotors pose a lower risk of interference (Figure 8). 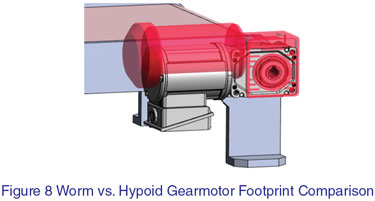 Another beneﬁt of hypoid gearmotors is that they are symmetrical along their centerline (Figure 9). Worm gearmotors are asymmetrical and result in machines that are not as aesthetically pleasing and limit the amount of possible mounting positions. 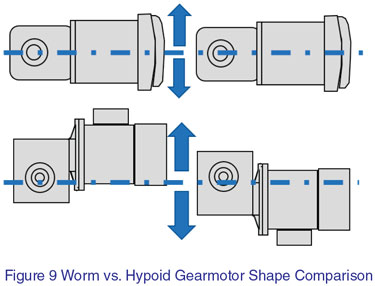 In motors of equal power, hypoid drives far outperform their worm counterparts. One important aspect to consider is that hypoid reducers can move loads from a dead stop with more ease than worm reducers (Figure 10). 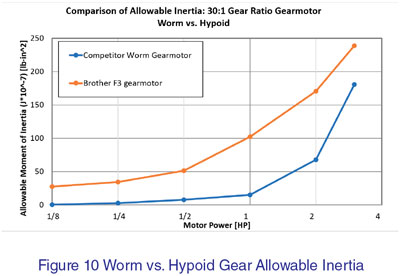 Additionally, hypoid gearmotors can transfer substantially more torque than worm gearmotors above a 30:1 ratio due to their higher efﬁciency (Figure 11). 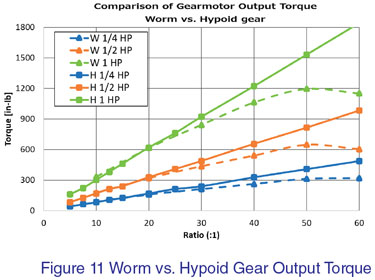 Both comparisons, of allowable inertia and torque produced, were performed using equally sized motors with both hypoid and worm reducers. The results in both studies are clear: hypoid reducers transfer power more effectively.

As shown throughout, the advantages of hypoid reducers speak for themselves. Their design allows them to run more efﬁciently, cooler, and provide higher reduction ratios when compared to worm reducers. As proven using the studies presented throughout, hypoid gearmotors can handle higher initial inertia loads and transfer more torque with a smaller motor than a comparable worm gearmotor.
This can lead to upfront savings by allowing the user to purchase a smaller motor, and long-term savings in electrical and maintenance costs.
This also allows hypoid gearmotors to be a better option in space-constrained applications. As shown, the overall footprint and symmetric design of hypoid gearmotors makes for a more aesthetically pleasing design while improving workplace safety; with smaller, less cumbersome gearmotors there is a smaller chance of interference with workers or machinery. Clearly, hypoid gearmotors are the best choice for long-term cost savings and reliability in comparison to worm gearmotors.

Brother Gearmotors offers a family of gearmotors that increase operational efﬁciencies and reduce maintenance needs and downtime. They offer premium efﬁciency units for long-term energy savings. Besides being highly efﬁcient, its hypoid/helical gearmotors are compact in size and sealed for life. They are light, reliable, and offer high torque at low speed unlike their worm counterparts. They are permanently sealed with an electrostatic coating for a high-quality ﬁnish that assures consistently tough, water-tight, chemically resistant units that withstand harsh conditions. These gearmotors also have multiple standard speciﬁcations, options, and mounting positions to ensure compatibility. 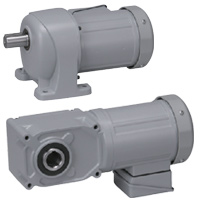 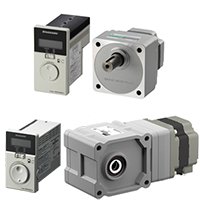