Below you will find an overview of the terms most commonly associated with our electric linear slides product lines.

A play along the ball within the raceways of the ball screw and screw nut. 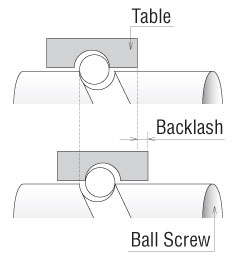 The Ball Retainer® holds individual balls in a manner preventing contact between adjacent balls and thereby allowing smooth rotation of balls. The LM Guide® adopting Ball Retainer® is structured so that the balls move along a circular path while being held by Ball Retainer®.
This structure provides the following benefits:

• The balls do not make contact with each other and thus grease lasts longer, resulting in a longer life and maintenance-free period. Since grease does not splash much, less dust is produced.

• The balls move smoothly and generate less noise without clashing with each other.

• The balls do not make contact with each other and thus less heat is generated, which makes this structure ideally suited for high-speed operation.

The class of lubricants applied to smooth the movement of guides and moving parts of the ball screw. Grease forms an oil film on metal surface to reduce wear and friction, thereby prolonging the life and preventing rust. Linear slides require periodic maintenance of grease according to their use conditions.

The life of a linear slide is generally affected by the rolling fatigue life of its ball screw or linear guide. When stress is applied repeatedly to the raceways and rolling elements of the ball, flaking (a phenomenon in which the metal surface turns into small scale-like pieces to separate from the base metal) occurs due to material fatigue caused by rolling fatigue. The rolling fatigue life refers to the time until the flaking occurs.

Since the life of each linear guide or ball screw is varied, a rated life is calculated for each product based on its maximum ratings (maximum transportable mass, maximum speed, etc.) as a reference for calculating the product's life. The life values specified for our products are not guaranteed. A reference traveling life of the EZSII Series is 5000 km (3000 km for EZS□E).

When the load acting upon the table extends beyond the table in the longitudinal, lateral or vertical direction, the linear slide receives a torsional force. This torsional force is referred to as "load moment." Moment applies in the three directions of pitching (MP), yawing (MY) and rolling (MR), as shown below. In a condition where moment is not applied in two of these three directions, the permissible moment applied only in one direction is defined as the maximum value of moment. Permissible moments in respective directions are specified for each product. 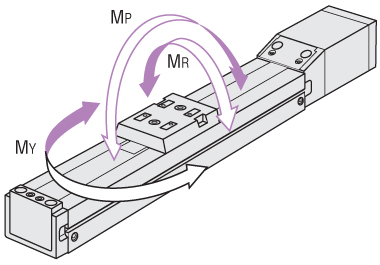 Here, "maintenance" specifically refers to maintenance of grease. The maintenance interval can be extended considerably through the use of a lubrication system QZ™.

The difference between positions achieved by repeated positioning operations to the same positioning point performed in the positive and negative directions.

A lubrication system that supplies an appropriate amount of lubricating oil to the raceways of the ball screw. An oil film is maintained between the rolling element and raceways, which extends the maintenance interval considerably.

The life of each linear slide is defined as a corresponding travel distance, which is affected by the moment that can be tolerated by the table. The maximum load moment indicates the maximum value of moment with which the linear slide can reach its specified life.

A value indicating the amount of error that generates when positioning is performed repeatedly to the same position in the same direction.