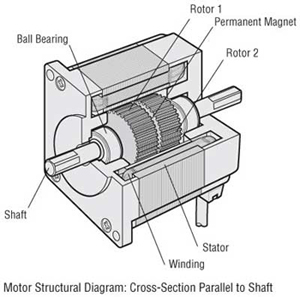 The stator has ten magnetic poles with small teeth, each pole being provided with a winding. Each winding is connected to the winding of the opposite pole so that both poles are magnetized in the same polarity when current is sent through the pair of windings. (Running a current through a given winding magnetizes the opposing pair of poles in the same polarity, i.e., north or south.)

The opposing pair of poles constitutes one phase. Since there are five phases, A through E, the motor is called a "5-phase stepper motor."

There are 50 small teeth on the outer perimeter of each rotor, with the small teeth of rotor 1 and rotor 2 being mechanically offset from each other by half a tooth pitch.

Excitation: To send current through a motor winding

Magnetic pole: A projected part of the stator, magnetized by excitation

Small teeth: The teeth on the rotor and stator 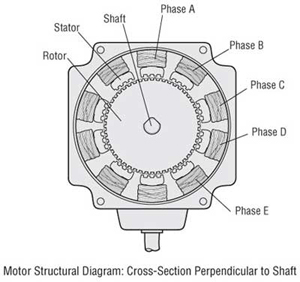 When Phase "A" is Excited 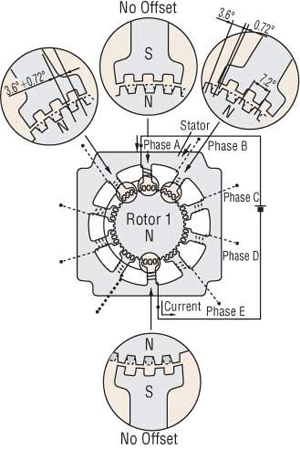 When Phase "B" is Excited 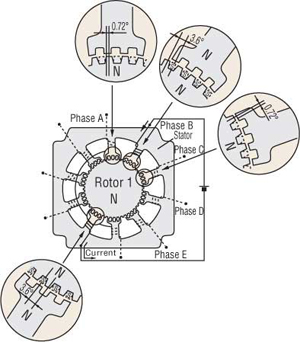 High resolution of 0.72˚ is inherent in the mechanical offset between the stator and rotor, accounting for the achievement of precise positioning without the use of an encoder or other sensors. High stopping accuracy of }3 arc minutes (with no load) is obtained, since the only factors affecting stopping accuracy are variations in the machining precision of the stator and rotor, assembly precision and DC resistance of windings.

The driver performs the role of phase switching, and its timing is controlled by a pulse-signal input to the driver. The example above shows the excitation advancing one phase at a time, but in an actual stepper motor an effective use of the windings is made by exciting four or five phases simultaneously. 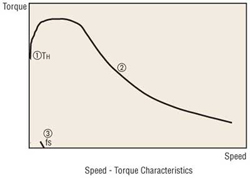 Maximum response frequency (fr) This is the maximum pulse speed at which the motor can be operated through gradual acceleration or deceleration when the stepper motor’s friction load and inertial load are 0. The figure below shows the speed – torque characteristics of a 5-phase stepper motor and driver package. 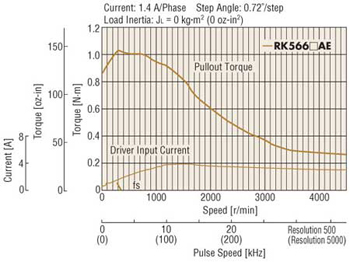 Inertial Load – Starting Frequency Characteristics These characteristics show the changes in the starting frequency caused by the load inertia. Since the stepper motor’s rotor and load have their own moment of inertia, lags and advances occur on the motor axis during instantaneous starting and stopping. These values change with the pulse speed, but the motor cannot follow the pulse speed beyond a certain point, so that missteps result. The pulse speed immediately before the occurrence of a misstep is called the starting frequency.

Changes in maximum starting frequency with the inertial load may be approximated via the following formula:

1. A single pulse input to a stepper motor at a standstill accelerates the motor toward the next stop position.

2. The accelerated motor rotates through the stop position, overshoots a certain angle, and is pulled back in reverse.

3. The motor settles to a stop at the set stop position following a damping oscillation.

Vibration at low speeds is caused by a step-like movement that produces this type of damping oscillation. The vibration characteristics graph below represents the magnitude of vibration of a motor in rotation. The lower the vibration level, the smoother the motor rotation will be. 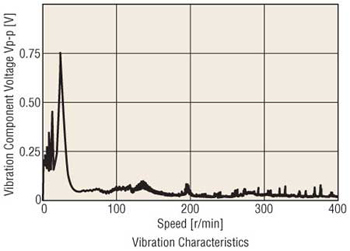 Angle – Torque Characteristics: The angle – torque characteristics show the relationship between the angular displacement of the rotor and the torque externally applied to the motor shaft while the motor is excited at the rated current. The curve for these characteristics is shown below: 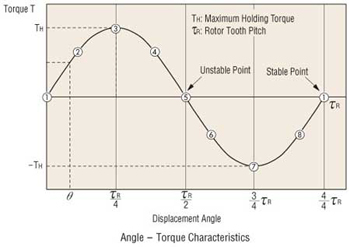 The following illustrations show the positional relationship between the rotor teeth and stator teeth at the numbered points in the diagram above. When held stable at point (1) the external application of a force to the motor shaft will produce torque T (+) in the left direction, trying to return the shaft to stable point (1). The shaft will stop when the external force equals this torque at point (2).

If additional external force is applied, there is an angle at which the torque produced will reach its maximum at point (3). This torque is called the maximum holding torque TH.

Application of external force in excess of this value will drive the rotor to an unstable point (5) and beyond, producing torque T (−) in the same direction as the external force, so that it moves to the next stable point (1) and stops. 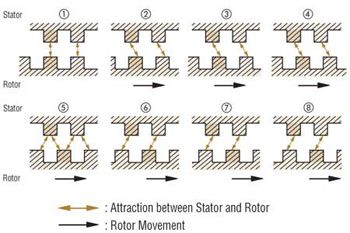 Stable Points: Points where the rotor stops, with the stator teeth and rotor teeth are exactly aligned. These points are extremely stable, and the rotor will always stop there if no external force is applied.

Unstable Points: Points where the stator teeth and rotor teeth are half a pitch out of alignment. A rotor at these points will move to the next stable point to the left or right, even under the slightest external force.

However, in bi-directional operation, double the displacement angle is produced over a round trip. When high stopping accuracy is required, always position in the same direction. 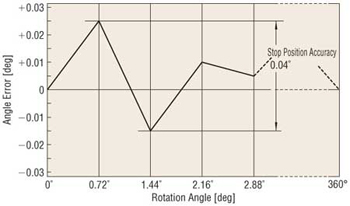 Every 5-phase motor and driver package listed in our catalog consists of a New Pentagon, five-lead wire motor and a driver incorporating a special excitation sequence. This combination, which is proprietary to Oriental Motor, offers the following benefits:

The following sections describe the wiring and excitation sequence.

This is a system unique to the 5-phase motor, in which four phases are excited. The step angle is 0.72˚ (0.36˚). It offers a great damping effect, and therefore stable operation. 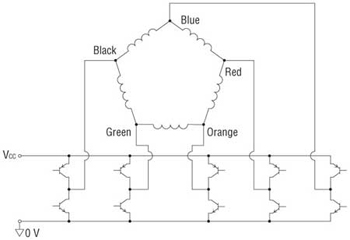 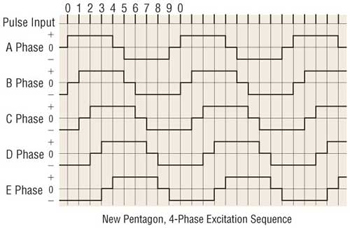 A step sequence of alternating the 4-phase and 5-phase excitation produces rotation at 0.36˚ per step. One rotation may be divided into 1000 steps. 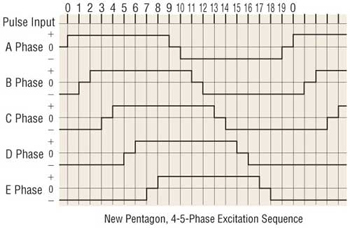 The stepper motor rotates through the sequential switching of current flowing through the windings. When the speed increases, the switching rate also becomes faster and the current rise falls behind, resulting in lost torque. The chopping of a DC voltage that is far higher than the motor’s rated voltage will ensure the rated current reaches the motor, even at higher speeds. 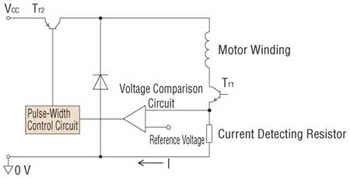 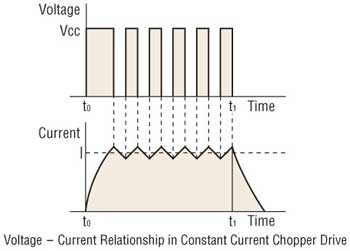 This difference in voltages applied to the motors appears as a difference in torque characteristics at high speeds. This is due to the fact that the higher the applied voltage is, the faster the current rise through the motor windings will be, facilitating the application of rated current at higher speeds. 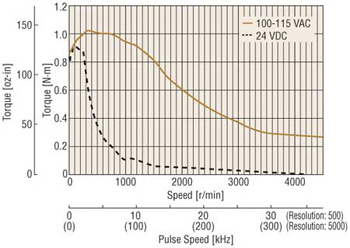 Microstep drive technology is used to divide the basic step angle (0.72˚) of the 5-phase stepping motor into smaller steps (up to a maximum of 250 divisions) without the use of a speed reduction mechanism.

The stepper motor moves and stops in increments of the step angle determined by the rotor and stator’s salient pole structure, easily
achieving a high degree of precision in positioning. The stepper motor, on the other hand, causes the rotor speed to vary because
the motor rotates in step angle increments, resulting in resonance or greater vibration at a given speed.

Microstepping is a technology that achieves low resonance, low noise operation at extremely low speeds by controlling the flow of
electric current fed to the motor coil and thereby dividing the motor’s basic step angle into smaller steps.

Thanks to the microstep driver, different step angles (16 steps up to 250 divisions) can be set to two step angle setting switches. By controlling the input signal for step angle switching via an external source, it is possible to switch the step angle between the levels set for the respective switches.

● Low Vibration
Microstep drive technology electronically divides the step angle into smaller steps, ensuring smooth incremental motion at low speeds and significantly reducing vibration. While a damper or similar device is generally used to reduce vibration, the low vibration design employed for the motor itself — along with the microstep drive technology — minimizes vibration more effectively. Anti-vibration measures can be dramatically simplified, so it’s ideal for most vibration sensitive applications and equipment. 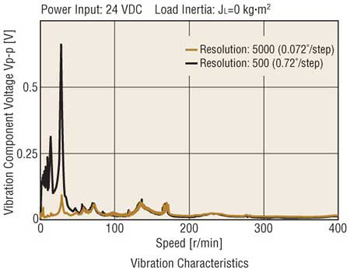 ● Improved Controllability
The New Pentagon microstep driver, with its superior damping performance, minimizes overshoot and undershoot in response to step changes, accurately following the pulse pattern and ensuring improved linearity. In addition, shock normally resulting from the motions of starting and stopping can be lessened. 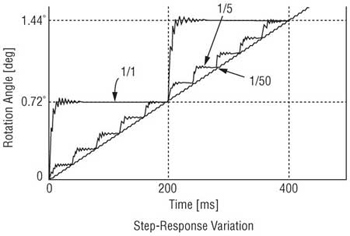 Overview of the Control System

A rotor position detection sensor is built into the counter end of the motor output shaft: 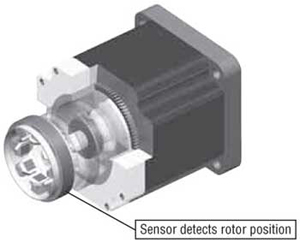 The sensor winding detects changes in magnetic reluctance due to the angular position of the rotor. 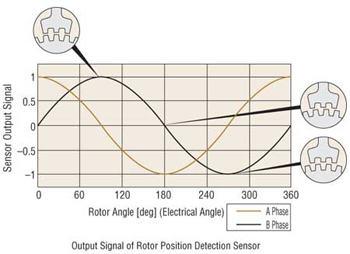 The deviation counter calculates the deviation (lag/advance) of the rotor’s actual angular position with regard to the position command by the pulse signal. The calculation result is used to detect a “misstep region” and operate the motor by switching between open loop and closed loop modes. 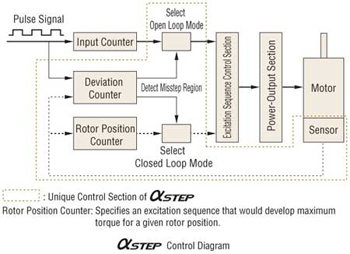 In the closed loop mode, motor-winding excitation is controlled so that maximum torque is developed for the given angular position of the rotor. This control method eliminates unstable points (misstep region) in the angle – torque characteristics. 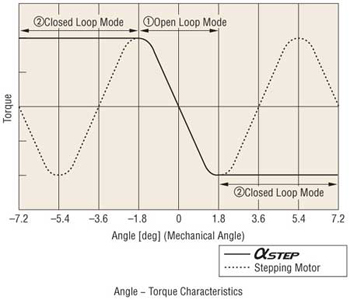 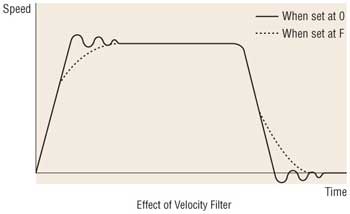 ● Excitation Timing Signal
The excitation timing (TIM.) signal is output when the driver is initially exciting the stepper motor (step "0"). Oriental Motor's 5-phase stepper motor and driver packages perform initial excitation when the power is turned on, and advance the excitation
sequence each time a pulse signal is input, completing one cycle when the motor shaft rotates 7.2˚.

When turning on the power to start automated equipment or restarting the equipment after a power failure, it is necessary to return stepper motors to their standard position. This operation is called the "return to mechanical home operation."

As the pulse line cable becomes longer, the maximum transmission frequency decreases. Specifically, the resistive component and stray capacitance of the cable cause the formation of a CR circuit, thereby delaying the pulse rise and fall times. Stray capacitance in a cable occurs between electrical wires and ground planes. However, it is difficult to provide distinct numerical data, because conditions vary according to the cable type, layout, routing and other factors. 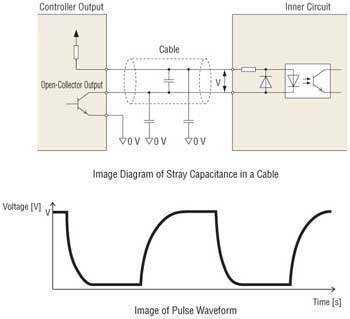 The transmission frequency when operated in combination with our products (actual-measurement reference values) are shown below:

Effect of Coupling Rigidity on Equipment

The specifications that indicate coupling performance include permissible load, permissible speed, torsional spring constant, backlash (play) in the coupling, and permissible misalignment. In practice, when selecting couplings for equipment that requires high positioning performance or low vibration, the primary selection criteria would be "rigid, with no backlash." However, in some cases coupling rigidity has only a slight effect on the equipment's overall rigidity.

This section provides an example by comparing the overall rigidity of equipment consisting of a ball screw drive in two applications where a jaw coupling such as an MCS and a bellows coupling offering higher rigidity are used. (Data is taken from KTR's technical document, for which reason the coupling dimensions differ from the products offered by Oriental Motor.)

Therefore, the total rigidity in the axial direction of the ball screw, bearing and nut Rt is calculated as follows: 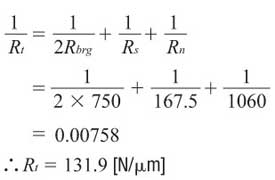 This rigidity in the axial direction is applied as torsional rigidity Ct.

2. Obtain the overall equipment rigidity C when a jaw coupling is used. 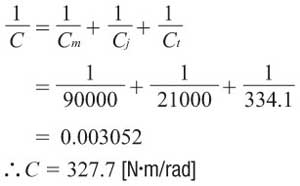 3. Obtain the overall equipment rigidity C when a bellows coupling is used. 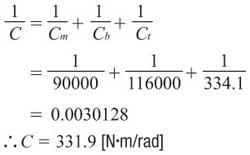 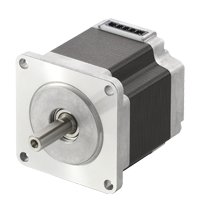 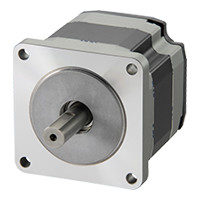