An "AC motor and speed controller package" is a unit product composed of a robust, single-phase induction motor, and a low noise, long life speed controller. The DSC Series is a new AC Speed Control product. In order to improve ease of use, this product is equipped with an operation panel for monitoring various functions, as well as for digital settings. The new DSC control technology also accomplishes two functions that conventional products cannot; instant reversal of single phase induction motors, and vertical drive by deceleration control (electromagnetic brake type only).
This article describes the features and new control technology of the DSC Series.

An "AC motor and speed controller package" is a packaged product consisted of a robust AC motor and a compact, low noise, and long life speed controller (1), allowing stable speed control while changing the applied voltage to the induction motor with the phase control system. For the past 40 years, Oriental Motor has developed a multitude of AC speed control motors while meeting the needs of the market. These motors have been used as power sources for various kinds of industrial devices.

This article introduces the features and control technologies of the DSC Series. 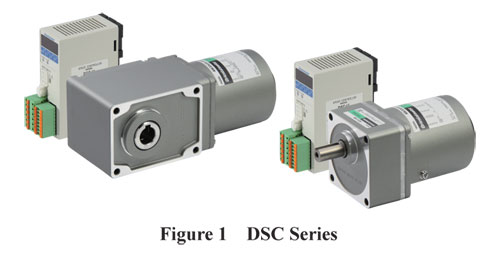 2. Features of the DSC Series

The DSC Series is an AC speed control motor which achieves high reliability by closed loop control, and also realizes downsizing of the speed controller due to digitalization of the phase control circuit. Excellent speed stability characteristics with very little speed fluctuation are achieved as speed regulation with respect to the load is ±1% or less (reference value). Also, because of the phase control system, this series has lower noise compared to general inverter control products. The product lines of the DSC Series are indicated in Table 1.

The main features of the DSC Series are indicated below:
1) Built-in Operating Panel on Controller (Refer to Figure 2)
The operating panel enables functions such as digital speed setting of the operation data at a maximum of 4 speeds, performing various types of monitoring, parameter setting, and test operation. 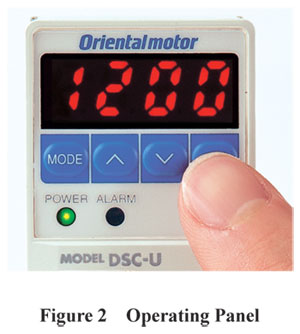 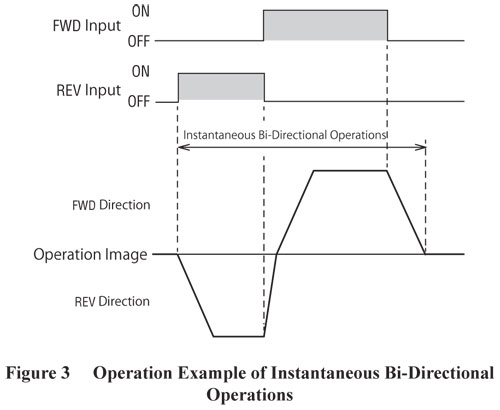 3) Gravitational Operation and Vertical Operation are Possible (Electromagnetic Brake Type)
Gravitational and vertical operations, which were impossible with conventional motors, are possible with the new control technologies by adjusting the amount of brake current (Note 1) in order to control braking force (deceleration torque).

Braking via a brake current does not require a regeneration unit. With a simple system configuration, gravitational and vertical operations are possible (Refer to Figure 4). 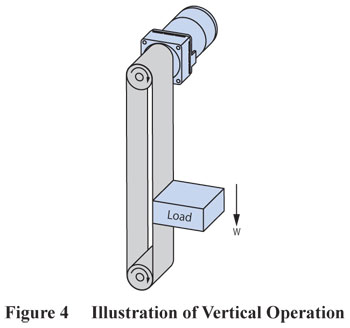 4) Simple Wiring and Connection
Easy wiring and connection are possible with a screw-less connector for a power line and a connector between a motor and controller (Refer to Figure 5). 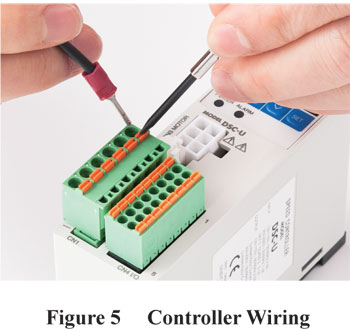 5) Equipped with Usability Improved Functions
· Functions for Setting and Controlling the Speed
Set the speed control values with the built-in key pad on the face of the controller and select with an external DC voltage. For manual speed control, an external speed potentiometer can be used. 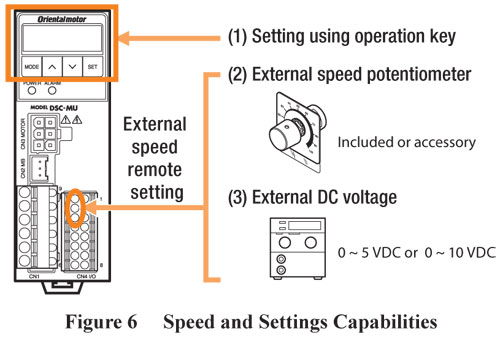 • Function to Easily Adjust Speed Difference
During Parallel-Motor Operation
With a single external speed command, up to 20 motors can be operated in parallel. During a parallel-motor operation when each motor has speed difference, the speed difference can be easily adjusted with the "External Speed Command Off-Set" parameter.

• Function to put a Limit on Speed Setting Range
An unintended speed setting operation can be avoided by using the "Speed Upper and Lower Limit" parameter to put a limit on the speed setting range in advance.

• Function to Lock Data Editing
The data editing can be locked by holding the MODE key on the operating panel. While being locked, all setting operations are disabled and thus, incorrect operations such as accidentally rewriting or deleting data can be avoided.

6) Combination of Highly Reliable Motor and Gearhead
This series employs the KII Series motor and gearhead, which offer excellent permissible torque and strength. This combination achieves improvements such as equipment downsizing and reliability. 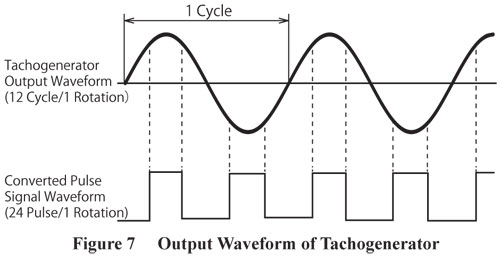 A speed controller adjusts the amount of applied voltage to the motor with the phase control, in order to make the setting speed and motor speed the same (Refer to Figure 8).

TRIAC semiconductor devices are used for the phase control. Figure 9 shows the configuration of the phase control circuit. The applied voltage to a motor is adjusted by controlling firing angles of the TRIAC. The built-in TRIAC devices function for operation and brake. Turning on the TRIAC for brake during an instantaneous stop, the DC-component brake current is supplied to motor windings to generate deceleration torque. 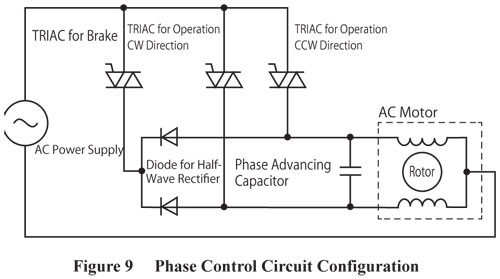 Conventional induction motors needed to stop the motor first in order to perform instantaneous bi-directional operations. This is because there is a negative torque range within the speed - torque characteristics of induction motors (Refer to Figure 10). For this reason, even if the rotating magnetic field was reversed, there were times when the motor could not reverse when used under a small frictional load. Therefore, in the past it was necessary to use reversible motors when performing instantaneous bi-directional operations. 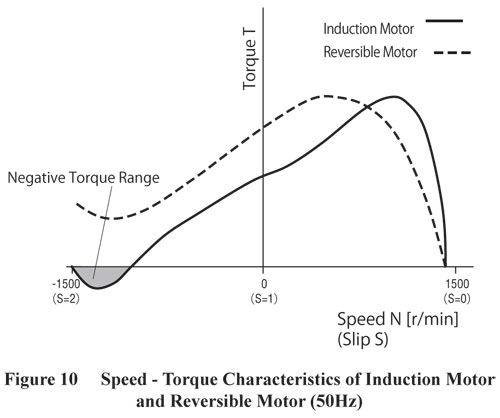 Reversible motors increase the starting torque by raising the capacity of the combined phase advancing capacitor, adjusting to the speed - torque characteristics without a negative torque range. Therefore, reversible motors are inefficient in motor efficiency and there is a limit to the operating time. Also, they are equipped with a friction brake, in order to shorten the time required to reverse and to reduce an overrun when stopping the motor. Table 2 shows the comparison of induction motors and reversible motors. 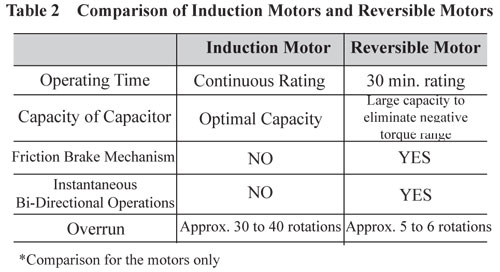 The DSC Series automatically passes a brake current for a short time during instantaneous bi-directional operations. After decelerating to the speed without a negative torque range, the rotating magnetic field is reversed, allowing to perform instantaneous bi-directional operations via an induction motor (Refer to Figure 11). Because this series uses an induction motor, continuous operations are possible. 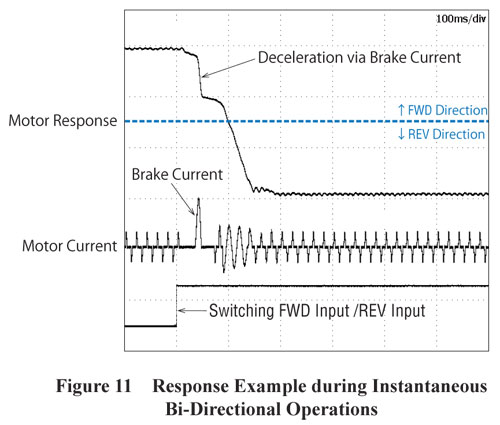 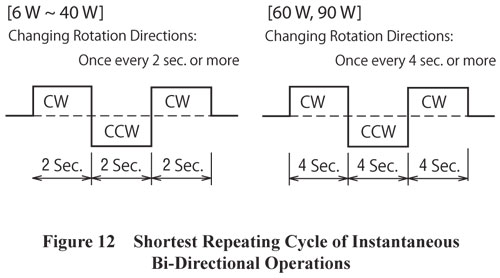 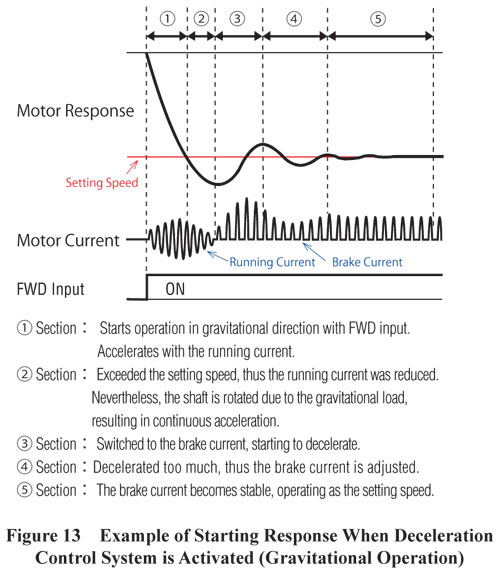 In this manner, speed control allows motors to operate according to the setting speed, even during the gravitational operation. 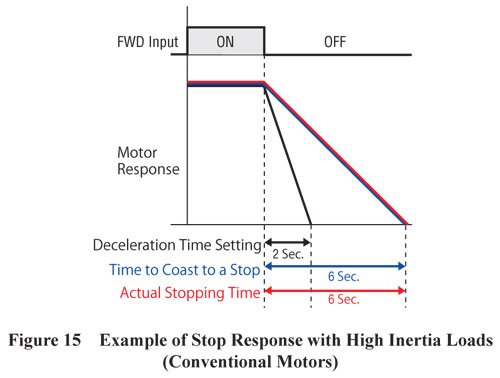 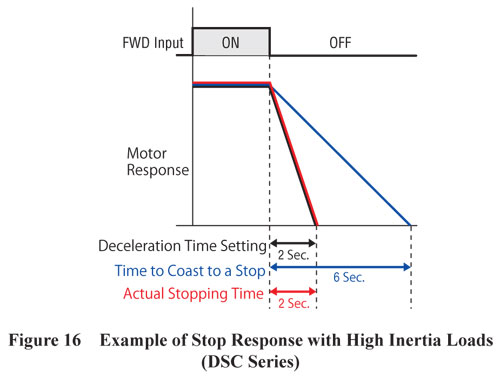 Also, with the deceleration torque output method via the deceleration control system, regenerative voltage does not get generated within the controller. For this reason, a regeneration unit is not required, allowing to perform gravitational and vertical operations with a simple system configuration.

The deceleration control system is achieved when the brake current is supplied. When continuing an operation under the deceleration control system, the motor may generate a significant amount of heat, causing the motor to activate the overheat protection. Therefore, there are limitations on operating time and running duty during gravitational and vertical operations (Refer to Figure 17). There are no limitations on the 6W type. Under the operating conditions that the motor case temperature is below 90°C (194°F), such as when the motor's operating ambient temperature is low, operations with a longer operating time and operating patterns with a short stopping time are possible. 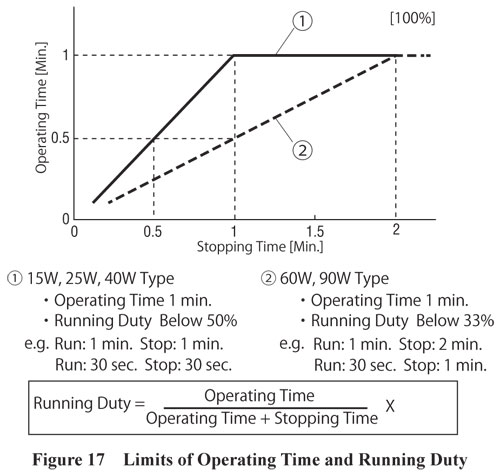 As indicated in Section 3.1, the rotation direction information cannot be obtained by the speed detection method with a tachogenerator. Therefore, when in an upward direction driving a load that exceeds the drive torque of the motor, it is possible that the motor may start moving toward the opposite direction of the commanded direction. In order to avoid such situations, permissible torque specifications are provided for specific use that the motor output shaft is rotated by external force such as gravitational or vertical operations. In addition, the larger the load is, the more the brake current is applied during a gravitational operation. The permissible torque specifications are established while considering heat generation of the motor. Because the permissible torque specifications are set per gear ratio, a suitable motor can be selected while referring to Oriental Motor website or catalogs.

4. Summary
The features and control technologies of the DSC Series that allow gravitational and vertical operations were explained in this article. With the operating panel built into the controller, the DSC Series has great usability while equipped with excellent speed control and functions.

By being able to perform various operations, the possibilities of induction motor applications have been significantly expanded. We highly recommend that you consider this product when designing your equipment.

(Note 1) When a half-wave rectification DC component current is supplied at the same phase to the motor's main winding and auxiliary winding, braking force is generated. This half-wave rectification DC component current is described as a brake current.
(Note 2) It is when there is no voltage applied to a motor and the motor stops in a non-excitation state. The time required for the motor to coast to a stop is the time corresponding to the amount of inertia loads and frictional loads.
(Note 3) The 6W type is impedance protected. Although a motor does not stop due to generated heat, use the motor as instructed in this article, in order to avoid shortening service life of the motor. The 15-90W type is protected by the thermal protector and therefore, the motor will stop while the function is activated. 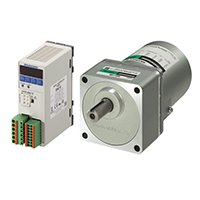