Overheated equipment can lead to many problems, including failure, shorter product life, early deterioration of parts, malfunction, and other safety risks. Cooling fans and blowers are essential to applications in the presence of heat. In order to avoid these problems, the appropriate cooling unit for these systems must be selected.

The features of cooling fans differ according to their air-blowing system. The following explains the structure of axial fans, centrifugal blowers and cross flow fans, as well as air flow-static pressure characteristics. Overheat protection is also discussed through the use of low-speed alarms, stall alarms, and thermal protectors. 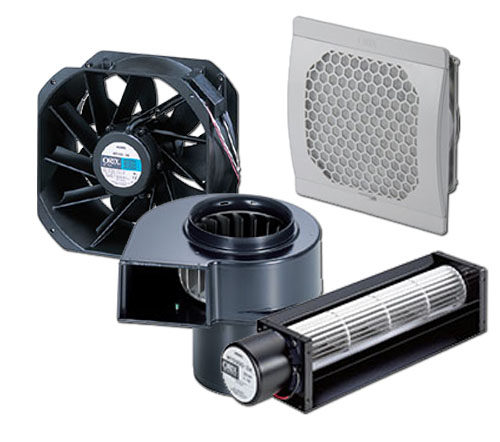 The propellers (fan blades) located in the circular flow path between the cylindrical hub and casing are used to force-feed air in order to generate air flow in the direction of the axis of rotation.

Since air flows along the axis of rotation, the structure is kept compact. Capable of generating a large air flow, axial fans are suited for applications requiring ventilation cooling where the entire space inside the equipment must be cooled. 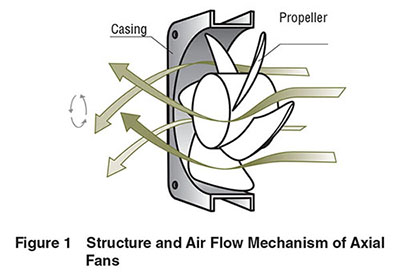 The centrifugal force of the cylindrically positioned runner (forwardfacing blades) generates rotational flows roughly perpendicular to the axis of rotation. The generated rotational flows are aligned in a uni-direction through scroll action, and the pressure rises accordingly.

Since the exhaust outlet is reduced to focus air in a specified direction, these blowers are used for spot cooling. The static pressure is also high, which makes them a suitable choice when cooling equipment through which air cannot flow easily or when blowing air using a duct.

A cross flow fan has an impeller similar to that of a centrifugal blower, but both sides of the fan are covered with side panels and thus no air enters from the axial direction. As a result, air flows that pass through the impeller are generated. Cross flow fans utilize these air flows. Since a long cylindrical impeller is used to blow air, air travels over a wide width. Also, uniform air can be achieved because air is exhausted sideways along the circumference of the impeller. 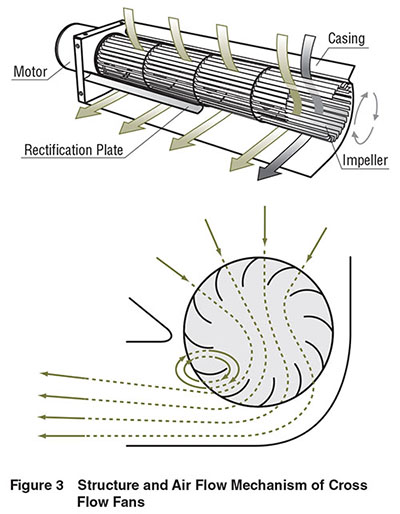 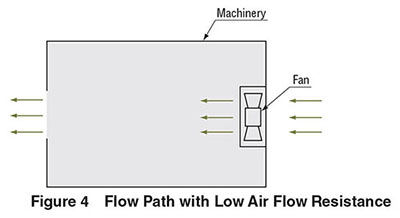 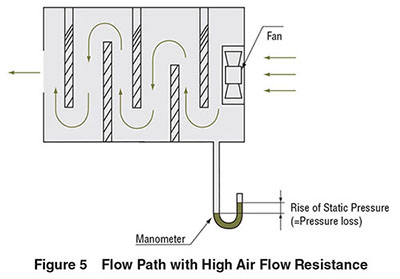 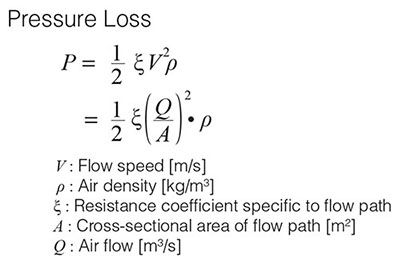 In terms of the fan, this formula says that to achieve a certain air flow (Q), the fan must be able to supply static pressure sufficient to increase the pressure inside the device by

When the fan characteristics are as shown in Figure 6, the fan is capable of a staticpressure of P2 at an air flow of Q1. This is more than sufficient for the required air flow, since it exceeds the required static pressure value of P1.
Since pressure loss is proportional to the square of the air flow, if the air flow needs to be doubled, then the fan chosen must be capable of providing not only twice the air flow but four times the static pressure, as well. 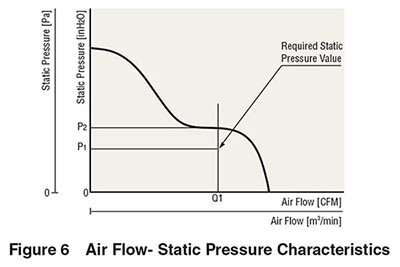 Applications that needs consistent airflow to cool can be adversely affected when fans slow down over time thus decreasing airflow. Low airflow will not provide the proper cooling, which may cause problems with motor components.

For low fan speed issues, we suggest looking at fans with either a low speed alarm, stall alarm, or pulse output. Fans with low speed alarms output an alarm signal when the fan speed drops to a certain level due to either end of life or ingress of foreign objects. Fans with stall alarms output an alarm signal when the cooling fan stops. These types of alarm are offered on MRS and MRE series AC axial fans, MDS and MDA series DC axial fans, MBD series DC centrifugal blowers and MFD series DC cross flow fans.

An alarm is output when the fan speed drops due to the service life of the fan or the ingress of foreign objects. This makes it possible to order and replace the fan with a new one before it stops. If multiple cooling fans are being used, it is possible to only replace the cooling fan with decreased cooling capacity. Even if the cooling capacity of the fan decreases, the effect of that on the equipment can be minimized. 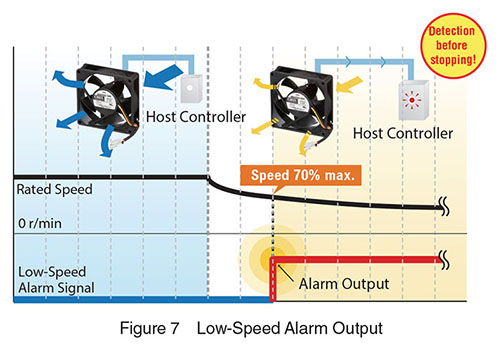 Stall alarms work by sending an alert when the fan stops. They quickly detect defective stops to allow the cooling fan to be replaced. 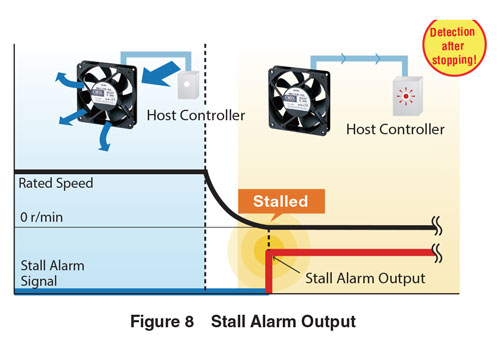 If a fan in run mode locks due to overload, ambient temperature rises rapidly, or the input current increases for some reason, the fan's temperature rises abruptly. If the fan is left in this state, the performance of the insulation within the fan may deteriorate, reducing its life and, in extreme cases, scorching the winding and causing a fire. In order to protect the fan from such thermal abnormalities, our fans recognized by UL and CSA Standards and conform to EN and IEC Standards are equipped with the following overheat protection device.

The MRS Series, MB Series (impeller diameter ϕ80 mm (3.15 in.) or more) and MF Series fans contain a built-in automatic return type thermal protector. The structure of a thermal protector is shown in the figure below. The thermal protectors employ bimetal contacts, with solid silver used in the contacts. Solid silver has the lowest electrical resistance of all materials, along with a thermal conductivity second only to copper.

(The fan winding temperature, where the thermal protector is activated, is slightly higher than the operating temperature listed above.) 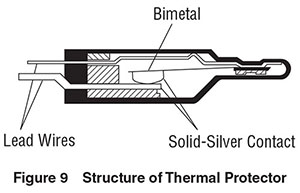 The MU and MB Series (MB520 and MB630 type) fans are equipped with impedance protection. Impedance protected fans are designed with higher impedance in the fan windings so that even if the fan locks, the increase in current (input) will be minimized and the temperature will not rise above a certain level.

Therefore, the range of sound pressure audible to the human ear can be conveniently expressed as 0 to 130 dB. 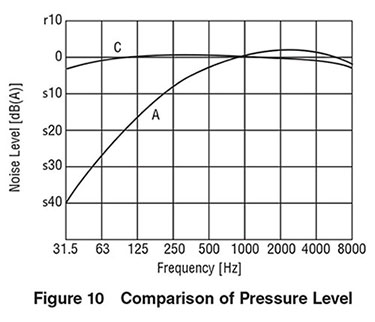 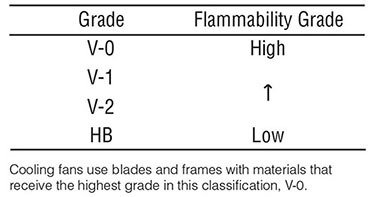 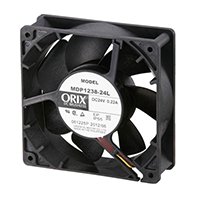 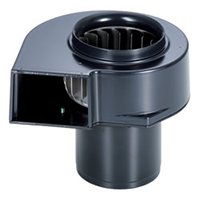 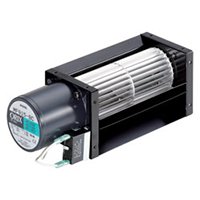 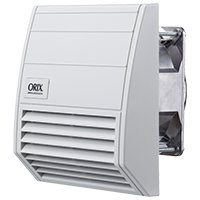