In recent years, the demand for equipment powered by natural energy sources such as solar and wind power, as well as the electric chargers for electric vehicles, has been rapidly increasing. Since this type of equipment is used in severe temperature and humidity environments, we should anticipate the need for temperature control in low temperature environment and potential problems, such as dew condensation due to the extreme temperature change.

To address these problems, we have expanded our thermal management products. For example, we have introduced a cooling fan with a wider operating temperature range, and a heating module to prevent dew condensation, etc.. From the viewpoint of the thermal management, our goal is to totally improve the temperature and humidity conditions.

Here, we introduce the cooling fan design considerations and test results. Furthermore, we show examples of the temperature and humidity management using a heating module, a temperature switch, and more.

In recent years, the demand for equipment powered by natural energy sources such as solar and wind power, as well as the electric chargers for electric vehicles, has been rapidly increasing. These types of equipment are used in severe hygrothermal environments while being exposed to extreme temperature changes.

To better understand the heat design, this article introduces the effective ways to use AC axial flow fans, which are operable even in a low temperature environment, as well as the heating module which is valid for hygrothermal countermeasures.

Today, a comfortable life is well-established at home and work, thanks to advanced control systems. The equipment that functions as the core for such control has many electrical/electronic devices. An appropriate heat design is required for these devices to run uninterrupted 24 hours a day, 365 days a year. It also contributes to the reliability and longer operating life of the equipment, as well as reducing costs of the overall equipment. Oriental Motor provides products and service from the viewpoint of Thermal Management, which keeps customers' equipment at a consistent temperature and achieves energy savings used for the heat measures. Thermal Management not only achieves high reliability and long life of the product but also reduces noises caused by heat measures.

In this chapter, the problems caused in the low temperature environment are explained, using examples from solar/wind-power generation facilities and a charging facility for EV (Electric Vehicle)/PHV (Plug-in Hybrid Vehicle).

In general, a wind-power generation facility is built in a severe hygrothermal environment such as at the top of a mountain or along the shoreline where strong winds blow. For a large wind-power generation facility and power conversion equipment, which height can reach 30 to 40 m (100 ~130 ft) tall, is installed. On windy days, it is expected to be around -40°C (-40°F) at night when the equipment is not in use. Furthermore, during the start-up, the internal device simultaneously starts the operation and therefore, a cooling fan to cool the device needs to accommodate the operation from low temperature conditions.

For EV and PHV charger, the equipment itself is installed outdoors. Therefore, in a low-temperature condition, it is possible that electronic parts under perform rated specifications or a charging cable becomes hardened causing it to crack. Also, condensation caused by the low air temperature needs to be taken into consideration and in this case, both thermal insulation and humidity control are required inside the equipment.

The cause of condensation generated within equipment is due to the internal temperature change under a state in which the internal absolute humidity (water content in the air) remains the same.

The relative humidity (% RH) can be obtained from the moist air diagram (Table 1). 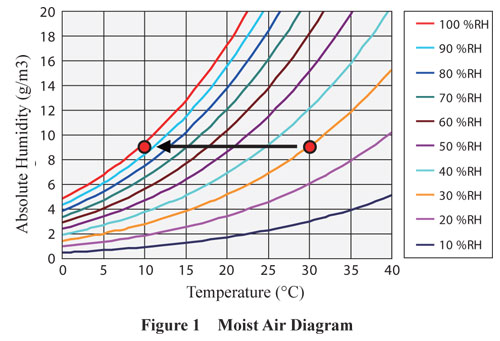 Traditionally, Oriental Motor would set the range of operating ambient temperature for cooling fans from -10 to 60°C (14 to 140°F). In order to meet the needs of the natural energy industries as indicated earlier, a reevaluation was conducted to expand the range of operating ambient temperature. During the reevaluation process, specific industries such as solar powered facilities and electric charging equipment, along with the ETSIEN 300 019 Series, which has a wide application range, were used as references.

Based on the IEC 60068 and IEC 60721 standards, the ETSI EN 300 019 Series is a standard that ETSI (Note 1) has used to classify products while substantiating the types and conditions of the environments where the products are used. Details of the types, definitions and testing conditions based on the IEC standards will be explained in this chapter. The positioning of the ETSI EN 300 019 Series is within the regional standard as shown in Figure 2. 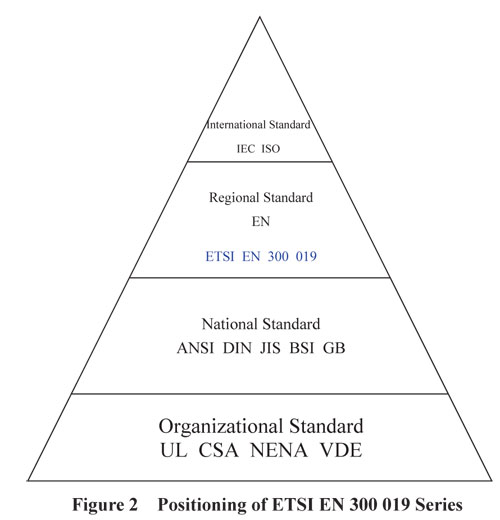 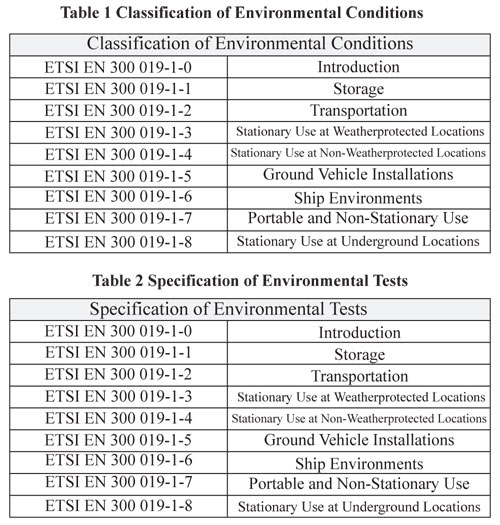 When using an Oriental Motor cooling fan under an assumed classification of environmental condition, the selection among the ETSI EN 300 019 Series would be as follows:

The ETSI EN 300 019 Series further divides classes among the classifications of environmental conditions and classes can change depending on a required performance. An example of the ETSI EN 300 019-1-1 Storage is shown in Table 3.

Along with the Storage, determinations for the Transportation and Stationary used at weather protected locations are indicated in Table 4.

Those tests were conducted under the most stringent conditions among each regulation.

The following criteria were used to make a determination for the tests indicated in Table 5:

In addition, the following tests are also conducted as an internal confirmation in order to further enhance reliability:

Based on the testing conditions described in Chapter 4, a test for a cooling fan was conducted in order to expand the operating environment range and to add storage temperature range. Findings from the test are indicated below.

Storage Temperature Range: Temperature range that a product can be left unattended with no current -40° ～ +70°C

The temperature range may vary for some products. For detailed specifications, please refer to general specifications in a catalog.

Our products are for use as built-in components and not intended for an outdoor single application. Since cooling fans are for cooling electronic devices, they are not intended for uses such as cold-air circulation.

A large air flow is a feature of axial flow fans. Various types are available, including large size and small size. 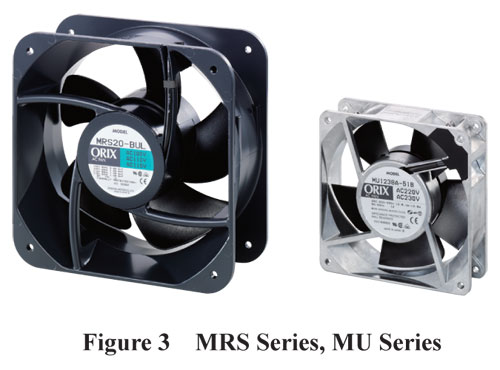 This is a sheath heater equipped with a heat sink, axial flow fan and finger guard. It is effective against dew condensation inside an enclosure, high humidity, freezing or low temperature in cold climates. 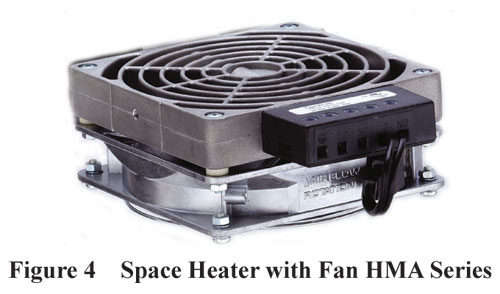 This automatically performs ON and OFF fan control for a cooling fan or heating module in accordance with temperature fluctuation inside of the equipment. The contact type has the bimetal system. 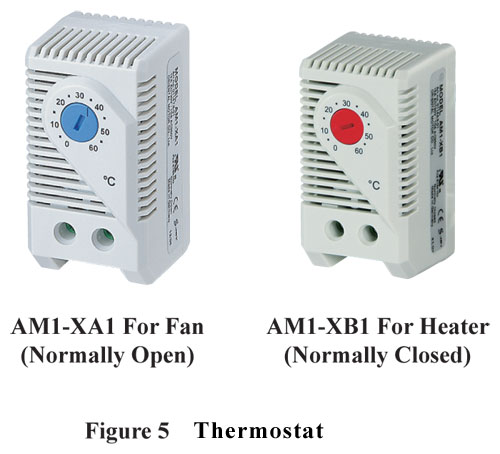 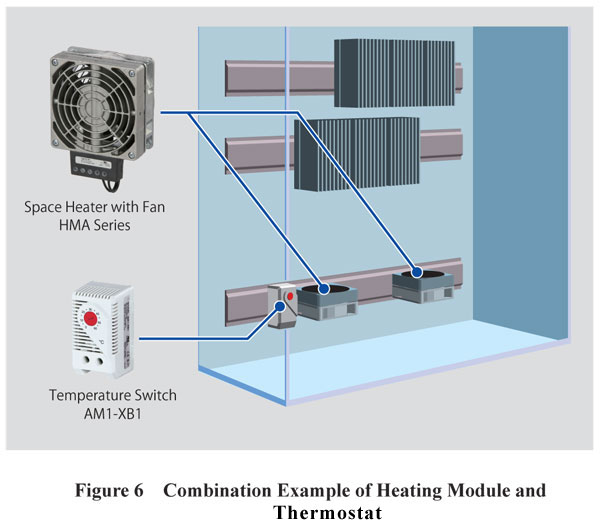 Figure 7 shows an application example of a space heater with a fan and a thermostat. Installing these devices effectively resolves the condensation issue within the control box. 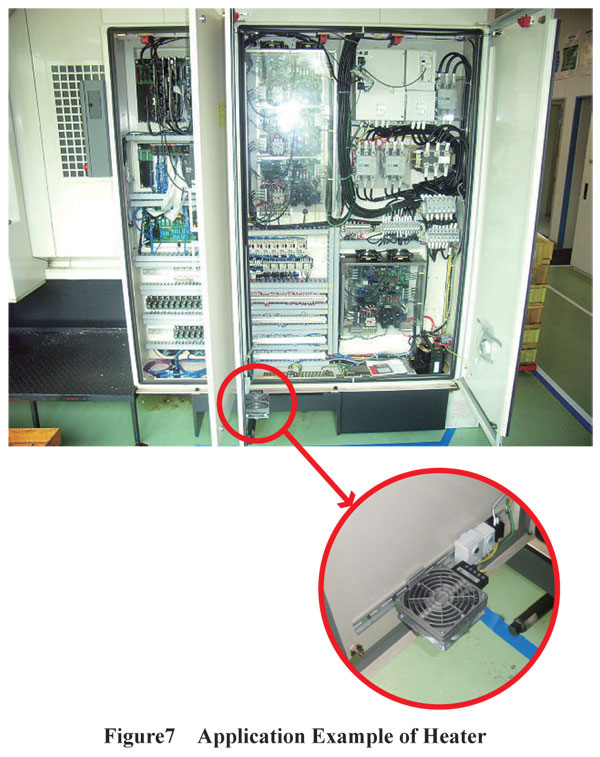 As the enlarged image shows, a space heater with a fan was installed at the bottom of the inside door. Then, a comparison measurement of humidity was conducted between a machine with a heater and no heater. The results are indicated in Figure 8. 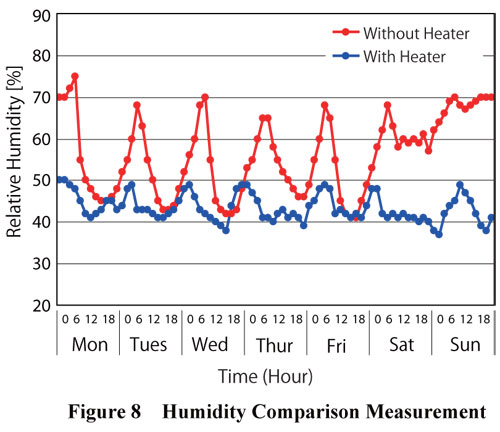 The relative humidity exceeds 75% at a maximum without a heater but by using a heater it can be maintained under 50%.

From the viewpoint of the Thermal Management, which controls temperature and humidity for cooling purposes in an integrated manner, probable issues in low temperature environments and their countermeasures were explained in this article. By appropriately incorporating Oriental Motor's thermal management products, customers' equipment can be used in various environments, and as a result, overall performance and reliability of the equipment will be improved. 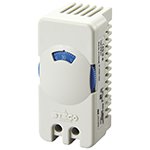 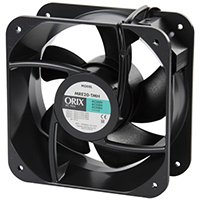