The demand for stepper motors that have high efficiency and low losses has been increasing, although it had been previously focused on high torque. The selection of the most suitable grade for and the improvement in fastening of the laminated cores has reduced the losses significantly at their peak when compared to conventional stepper motors. Lowering the losses of the motor has enabled continuous operation that was previously impossible. An expansion of the stepping motor’s usage into applications where another motor has been used for continuous operation and other uses due to the heat generation problem can now be pursued. In addition, these motors are very effective for energy saving. This paper explains the technology used for lowering the iron losses of the stepper motor.

The stepper motor can control the speed and the position accurately in an open loop control mode. The stepper motor had a disadvantage of large heat generation when rotating at high speed. It has had an advantage in which it can be used easily. The stepper motor has been used mainly to utilize the standstill holding brake force and the torque at low speed. However, recently, another customer demand for being able to operate continuously at high speed has risen thereby shortening the cycle equipment time. The motor loss is greatly reduced compared with the conventional stepper motor by use of suitable lamination sheet and fastening method of the laminated iron core. This paper focuses on lowering the losses of the stepping motor. The motor shown in Table.1 is selected for the conventional stepping motor described in this paper.

Fig. 1 shows the losses that are classified when a stepper motor is rotating. The total losses are divided into the driver losses generated in the driver and the motor losses generated in the motor.
The majority of the motor losses are copper loss and iron losses. The copper loss is a loss generated by the current flowing to a stator (stator winding), and the iron losses is another loss generated by the flux change in the core. The flux in the core changes by rotation of the rotor (field) or a current change of the stator (stator winding), therefore the iron losses can be classified into an iron loss by the field and the other by the stator winding. Hereafter, the former is called field iron loss, and the latter is called stator winding iron loss. 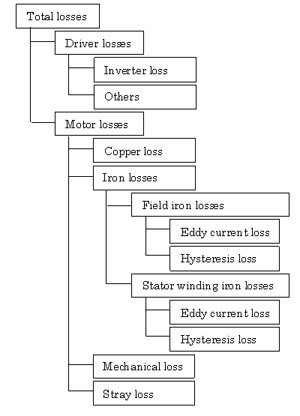 The iron losses can be classified into eddy current loss and hysteresis loss based on the magnetic generation principle. Other losses include mechanical loss and stray load loss. However, this discussion will disregard them, including those in the iron losses because they are small enough when compared with the iron and copper losses.

Fig. 2 shows a structure of the stepper motor. A hybrid type stepper motor uses a permanent magnet for the rotor, and equips inductors called teeth on outer diameter of the rotor core and inner diameter of the stator core. The iron loss is generated when the rotor rotates because the teeth periodically face, and the flux in the stator core changes periodically. It is called field iron loss as stated above. 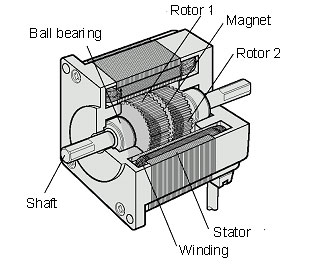 Fig. 3 shows a measurement system for the field iron losses. A torque meter is set between an external driving motor and a motor to be measured, and the rotor is rotated from outside. The rotational speed and the torque are measured, and the iron loss is calculated by the expression (1). 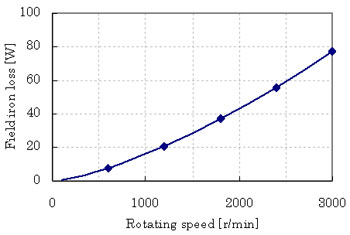 The configuration diagram of the loss measurement is shown in Fig. 5. A power meter is set between the power supply and the driver, and the driver and the motor respectively for measuring the power and the current.

The stepper motor is controlled with a driver so that a constant current may flow regardless of load. Therefore, a smaller load causes a bigger loss.
Consequently, the loss evaluation of the stepper motor with no load is the severest. When assuming Po=0 in expression (5) and expression (6), the whole driver input results in a total loss, and the whole motor input results in a motor loss. Fig. 6 shows the no-load loss of the conventional stepper motor. It is understood that the motor loss is relatively large compared with the driver loss. 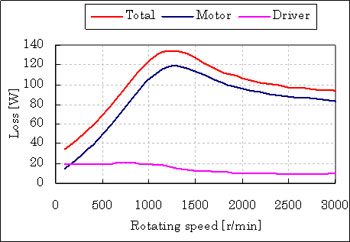 Fig.7 shows the result of separating the conventional stepper motor’s loss from copper loss and iron loss. The motor current, the torque, and the field iron loss are described for reference. 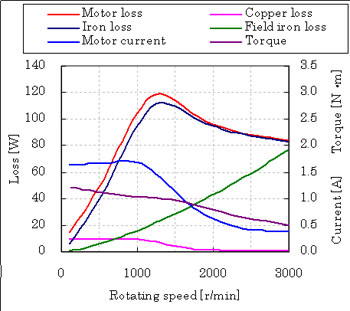 The following methods can be expected from the expression (2) and the expression (3) for lowering the iron loss.
(i) Material with a small iron loss constant (ce, ch) is used.
(ii) Thin lamination sheet is used. 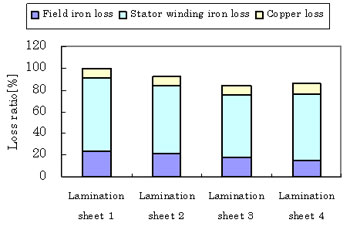 Fig.9 shows the relationship of the fastening method and loss of the stator core (laminated core). Though the stator core is made of the lamination sheets to which insulation coating is given. Presently, fastening by dimples is the most common method.

Fig.9: Relation of Fastening Method of and Loss

The electrical insulation between the lamination sheets is broken down at the dimples. An eddy current becomes easy to flow due to this dielectric breakdown, and the eddy current loss grows more than the value calculated by expression (2). Fig. 9 shows the relationship of the fastening method and the maximum loss. The loss is different depending on the fastening method. The low loss stepper motor has adopted a fastening method with a small loss. 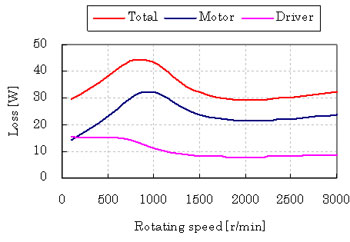 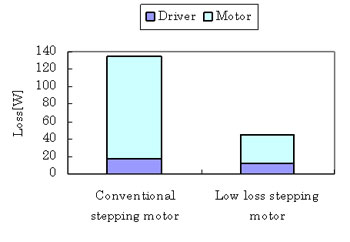 Fig. 12 shows the result in separating the motor loss of the low loss stepper motor into a copper loss and an iron loss. Field iron loss becomes bigger than iron loss at high speeds more than 2400r/min. This means that the current weakens the magnetic field and this condition is called field weakening. 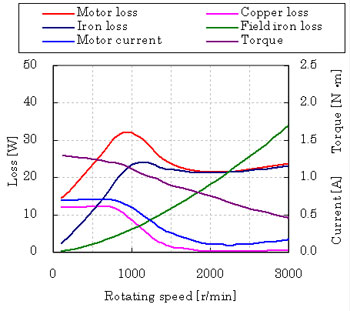 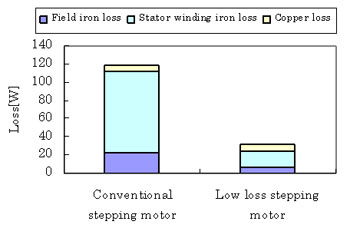 Fig14 shows the temperature rise of motor case at the speed of maximum loss. At this measurement, a heat sink equivalent to an aluminum plate in 250mm x 250mm 6mm is attached. The temperature of the conventional stepping motor rose to over 60℃ in about 5 minutes. If rotation continued after that, the coils in the stator would burnout. On the other hand, the temperature of the low loss stepper motor is less than 60℃. The coils will not burnout. 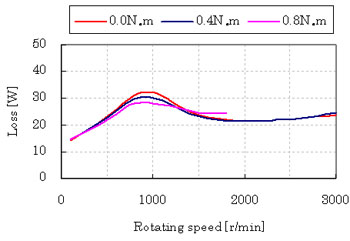 Fig. 16 shows the speed pattern in a typical positioning operation. This operation pattern accelerates up to a rotational speed Nm in acceleration time t1, then rotates at a constant speed over time t2, and decelerates in deceleration time t3, and stops. This operation pattern is called a trapezoidal drive, and the area of trapezoid shows the rotation amount. Usually, applications such as inspection and assembly, etc. are done in the stop time t4 after the completion of positioning, and the following operation is begun. Time tc is from a start-up to the following start-up and is called cycle time. When heat generation is large, it is necessary to set a longer stop time for cooling down. 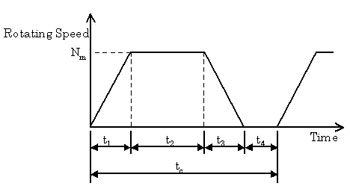 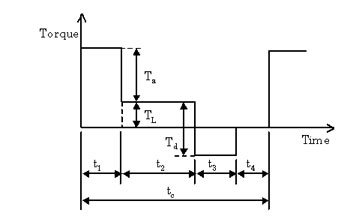 As described above, the stepper motor losses depend on the rotating speed, therefore the loss pattern can be shown in Fig. 18. 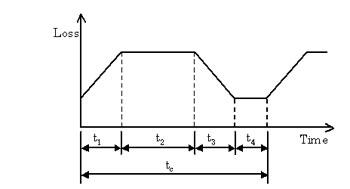 The motor loss is calculated when the shortest positioning operation is done with an inertial load of J=2.5×10-4kg･m2 (90mm in outside diameter, 5mm in thickness, and material of iron) attached. Table 2 results by calculating the operation pattern of which positioning time is the shortest in consideration of the safety rate.


From expression (10), the loss in each operation pattern is calculated, and Fig. 19 shows a calculation result of the speed pattern and the loss when the rotation amount is two rotations, as an example. 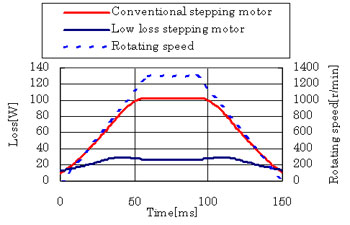 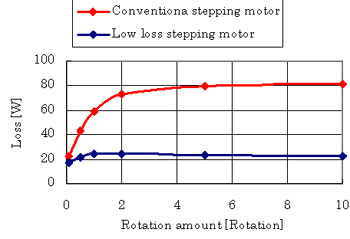 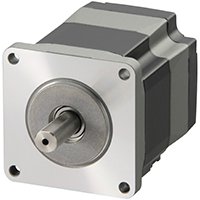 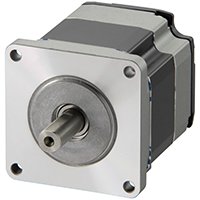 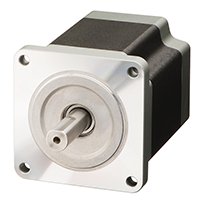